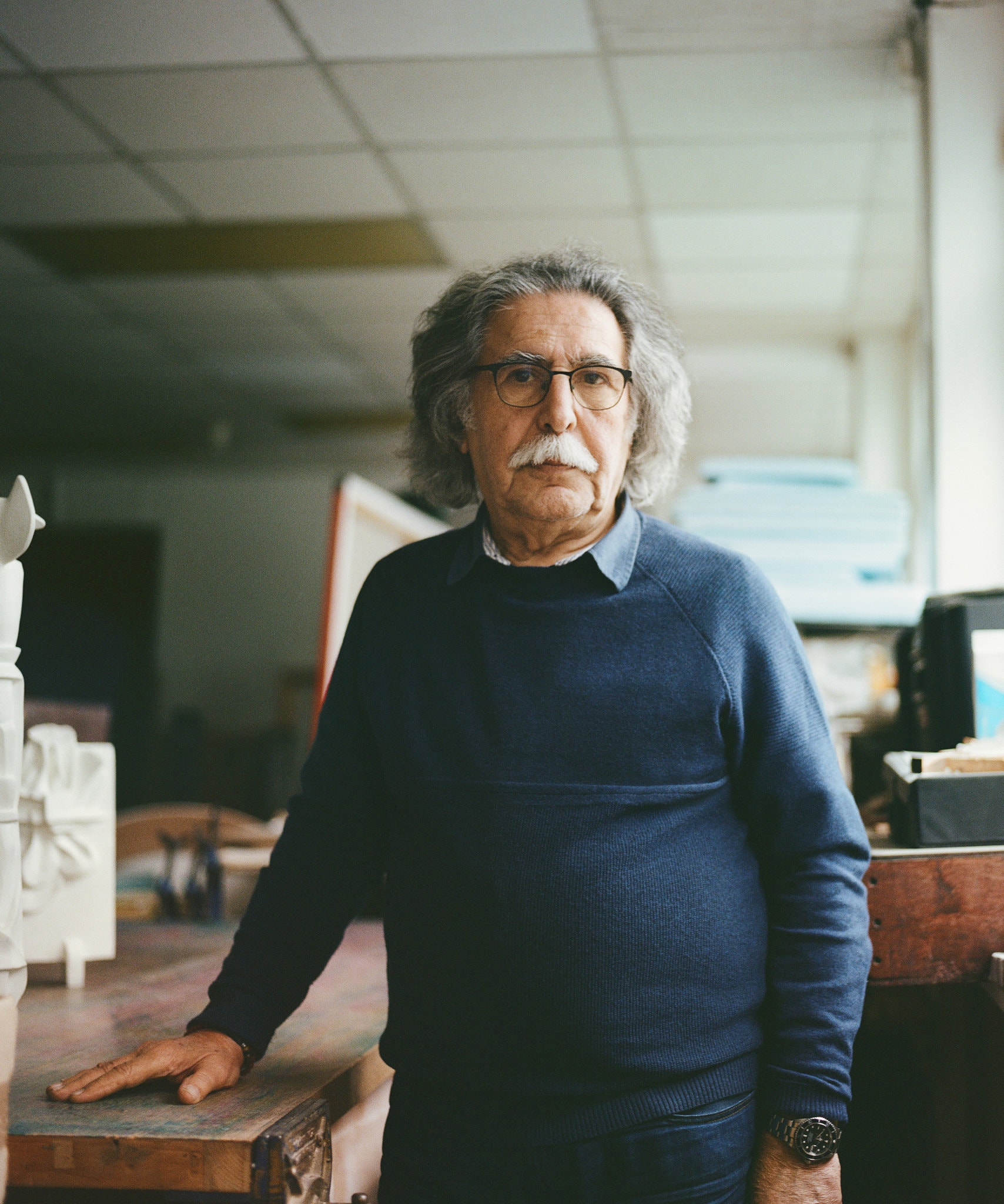 Dia al-Azzawi at his studio in London. He gave 11 of his works and other pieces from his collection to an exhibit on Iraqi art now showing at MoMA PS1 in Queens.Credit...Ellie Smith for The New York Times

LONDON — About a year after American forces seized Baghdad, an Iraqi man approached the artist Dia al-Azzawi in a cafe in Amman, Jordan, and offered to sell him several rare paintings.

Mr. Azzawi, who helped to assemble collections for various Iraqi museums in the 1960s and 1970s, knew that two of the works had been plundered from Baghdad’s Museum of Modern Art. He failed to convince the man to return them.

“All the people who went to steal everything, to destroy everything, they did it without realizing that all this stuff does not belong to the government, it did not belong to Saddam, it belonged to them,” he said during a lengthy interview at his London studio. “They lost their identity, they did not care about anything.”

For him, that wanton destruction, compounded by Islamic State fighters later taking sledgehammers to irreplaceable ancient statues, crystallized how the long years of dictatorship, war and punishing Western sanctions had unraveled Iraqi society.

The influence of those decades on Iraqi, American and other artists is the focus of a sprawling exhibition including more than 250 artworks at MoMA PS1, through March 1, called “Theater of Operations: The Gulf Wars 1991-2011.” 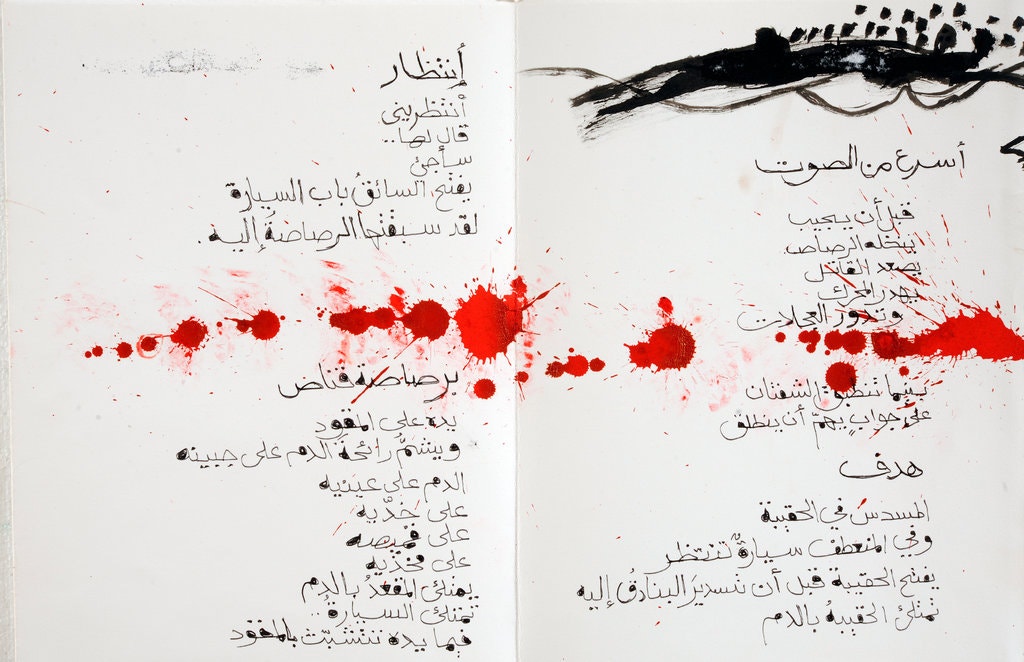 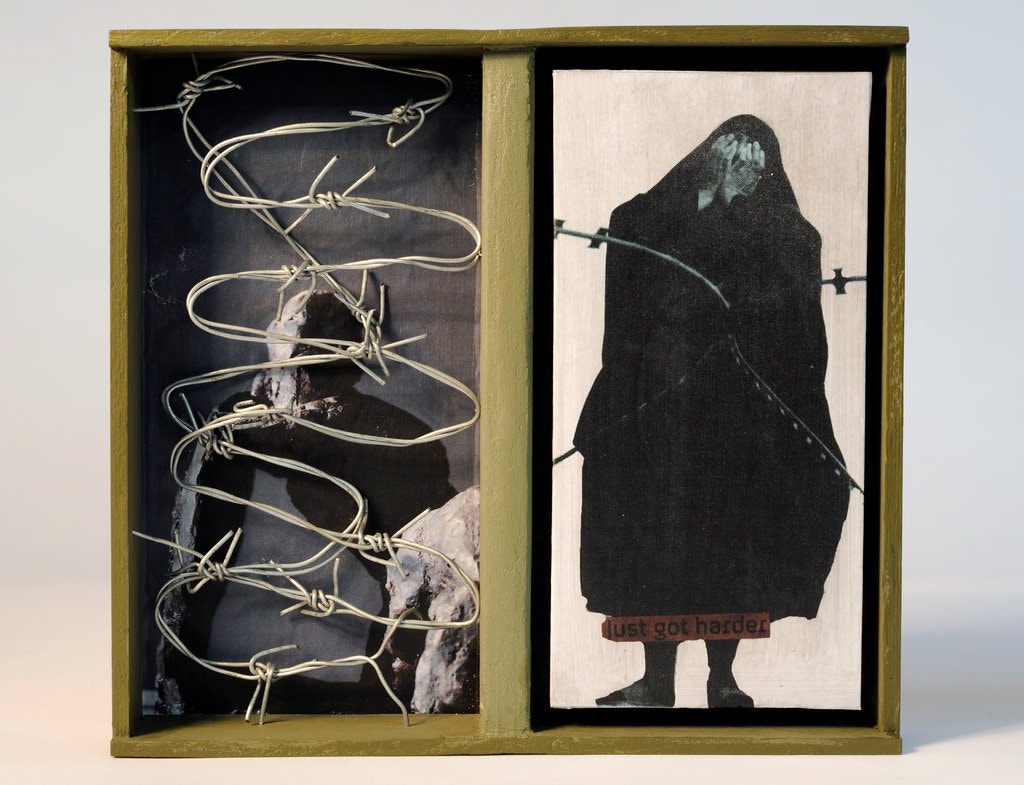 IMAGE: “Just Got Harder” (2010), one of numerous Azzawi works portraying life in his native country.Credit...Dia al-Azzawi

Much of Mr. Azzawi’s painting and sculpture focuses on the grim consequences of war, and he lent 11 of his own works, plus 28 pieces from his broad collection of modern Iraqi art. He has served as an important mentor to a younger generation of Iraqi artists.

His work can be overtly political — sweeping, raw canvases that engulf the viewer with the tragedy of violence. More subtle, abstract works that combine vivid colors, Arabic letters and fragments of antiquity or poetry also convey a message.

“I use the shape of the calligraphy to be part of the art,” he said, “I don’t use it to read Arabic. It is part of identity.” It also echoes the Islamic tradition of avoiding figurative art, or any painting, in favor of the written word.

Nada Shabout, a professor of art history at the University of North Texas who specializes in Iraqi art, said that “Azzawi’s work always has a presence.”

“It is a beautiful work of art,” she said, “but when you look into it, you see all these details with these strong and vital messages that in general always have a sense of defiance.”

At 80, Mr. Azzawi is a spry, puckish figure with shoulder-length, salt-and-pepper hair; a white walrus mustache and a ready chuckle.

He was born in 1939 in downtown Baghdad, the third of 10 siblings. His father was a wholesale grocer. He came of age amid the political ferment of the 1950s, as Arab kings fell to army coups.

Electrified by the Pan-Arab vision of Egypt’s Gamal Abdel Nasser, he was expelled from high school for leading anti-government demonstrations. At Baghdad University, he spent mornings studying the ancient civilizations of Mesopotamia and afternoons studying European art. He received a B.A. in archaeology in 1962 and a diploma from the Institute of Fine Arts in 1964.

Mr. Azzawi helped found a politicized collective of young artists. They sought to root modern Iraqi art in the ancient past, while also taking a position on regional events.

By 1976, Mr. Azzawi sensed that Iraq was becoming a totalitarian state, with art serving only to glorify the Baath Party. He moved to London and never lived in Iraq again.

In London, the Royal Academy of Art suggested he was too accomplished a painter already to enroll. To earn a living he worked for the Iraqi Cultural Center, organizing exhibitions from around the Arab world. 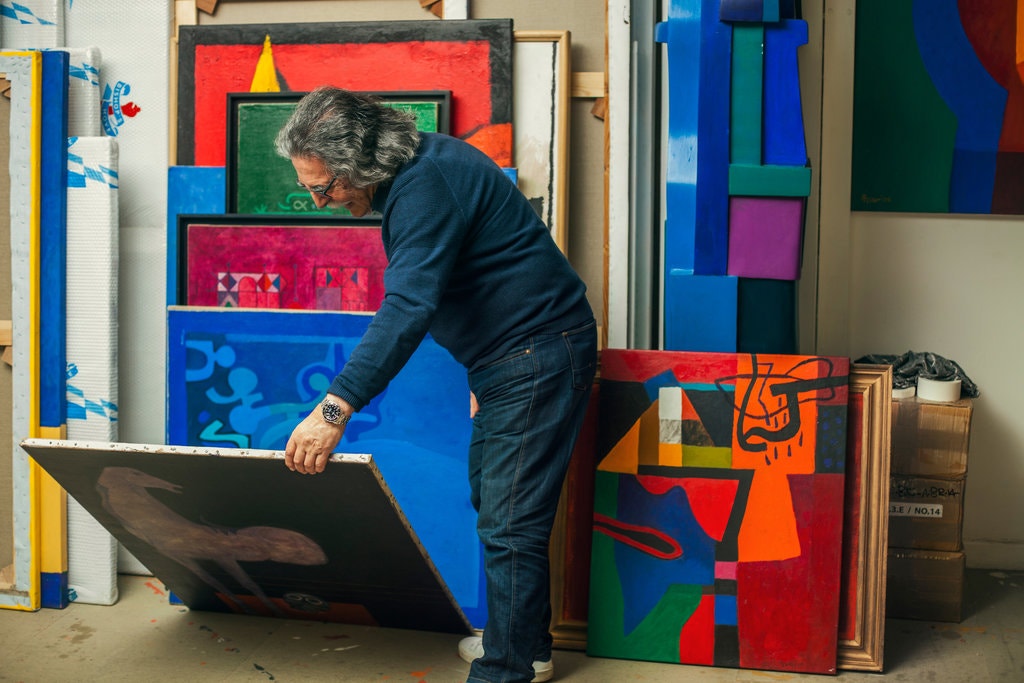 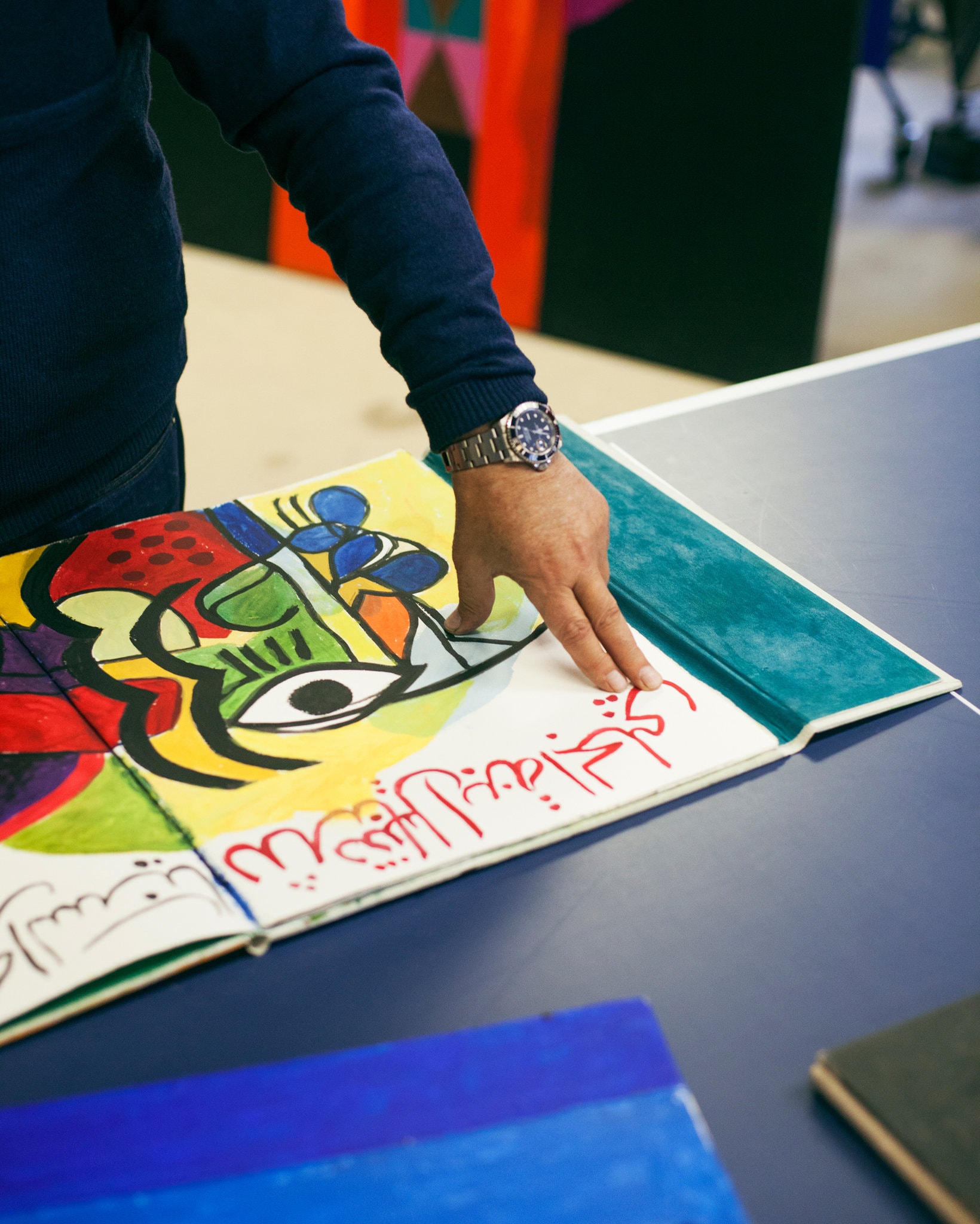 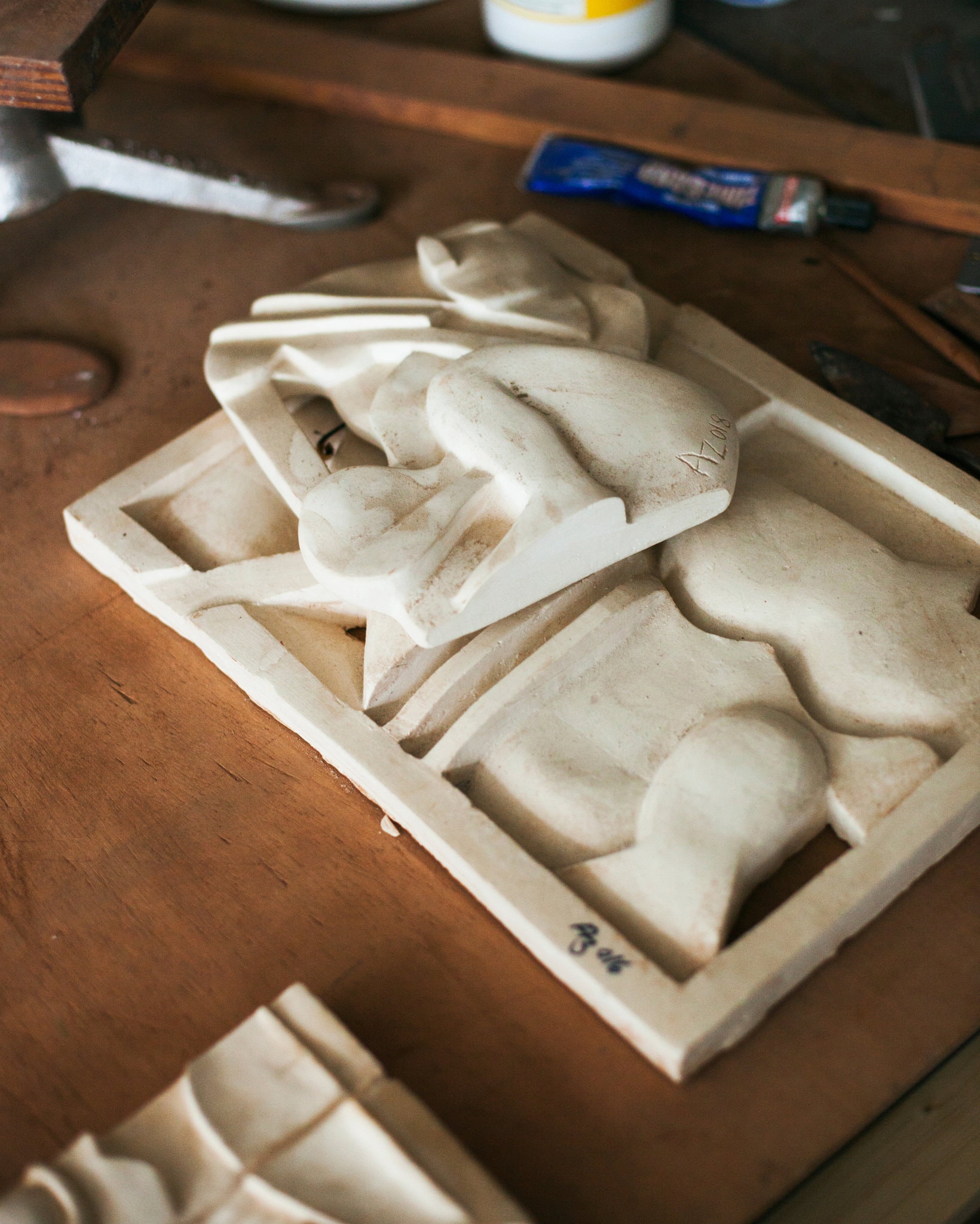 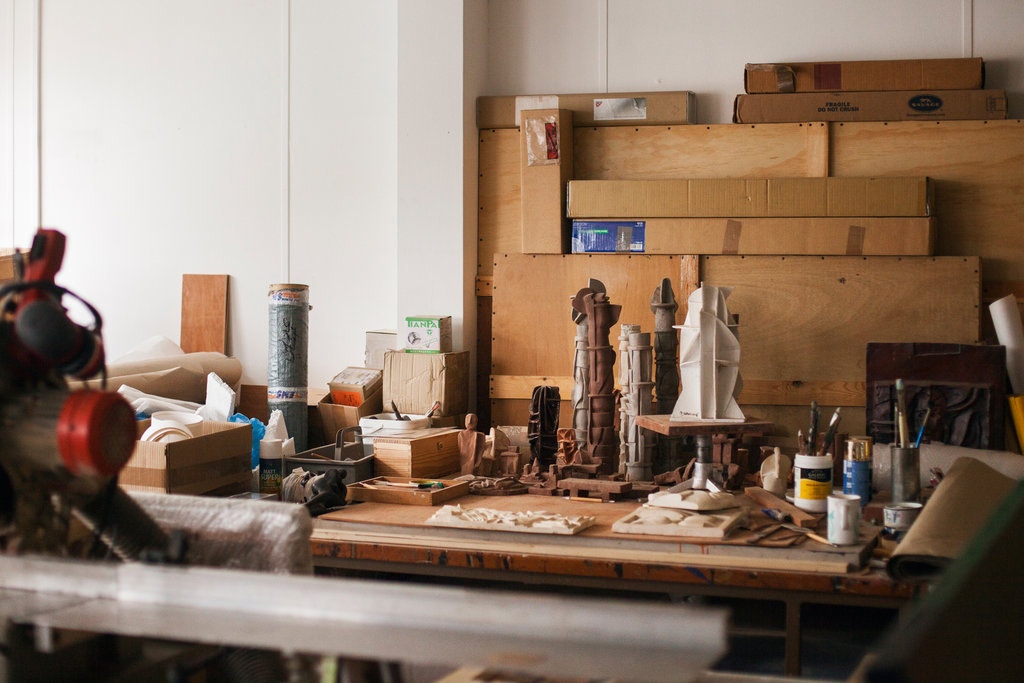 IMAGE: “White Song” (2016, painted board) sitting on stand alongside terra cotta and ceramic models.Credit...Ellie Smith for The New York Times

In 1982, while an invading Israeli army controlled Beirut, Christian Phalangist militiamen massacred hundreds of Palestinians in the Sabra and Shatila refugee camps.

Horrified, Mr. Azzawi created his first major work, drawing a massive, enveloping panorama of the carnage, now owned by the Tate Modern. He sketched almost feverishly on paper, he said, not thinking how difficult that would be to preserve.

He had long identified with the Palestinian cause, which deepened later when Iraq was destroyed. “They are Arabs, I am an Arab,” he said. “Everybody has the right to rebuild their history, their culture. We have the right to be part of the world.”

At his first solo exhibition, he met a young Swedish woman, Shashten Finstrom, whom he married. The couple had one daughter, Tala, who studied creative writing at Oxford and is now the mother of Mr. Azzawi’s grandson, aged 2. Named Frederick, Mr. Azzawi calls him Farid.

During the 1980s he developed a signature style, large abstract paintings in vivid colors that often included elements of Arabic letters or references to antiquity. The disparate elements were all grounded in Arab identity — the colors, for example, came partly from bright rural kilims.

Then in 1991, during the first gulf war, the color drained from his palate. Mr. Azzawi called the series Bilad as-Sawad, the Land of Darkness.

It is an historical name for the fertile, black soil in the Iraqi heartland. The black and white works were both an emotional reaction and an antiwar statement.

He found it a challenge artistically. “My work is very colorful,” he said, so he added shades of gray to try to relate the pieces to his usual palate.

In one of the war’s most grisly incidents, warplanes strafed a retreating Iraqi column north of Kuwait City, melting man and machine. In London, The Observer newspaper printed a gruesome picture of one victim.

When Mr. Azzawi went to capture the death mask in black and white, he felt a sudden kinship with the soldier and something inside him rebelled. “To do it in black and white would have been accepting reality and I did not want to accept reality in that sense,” he said about the work, “Victim’s Portrait,” which is in the MoMA PS1 show. 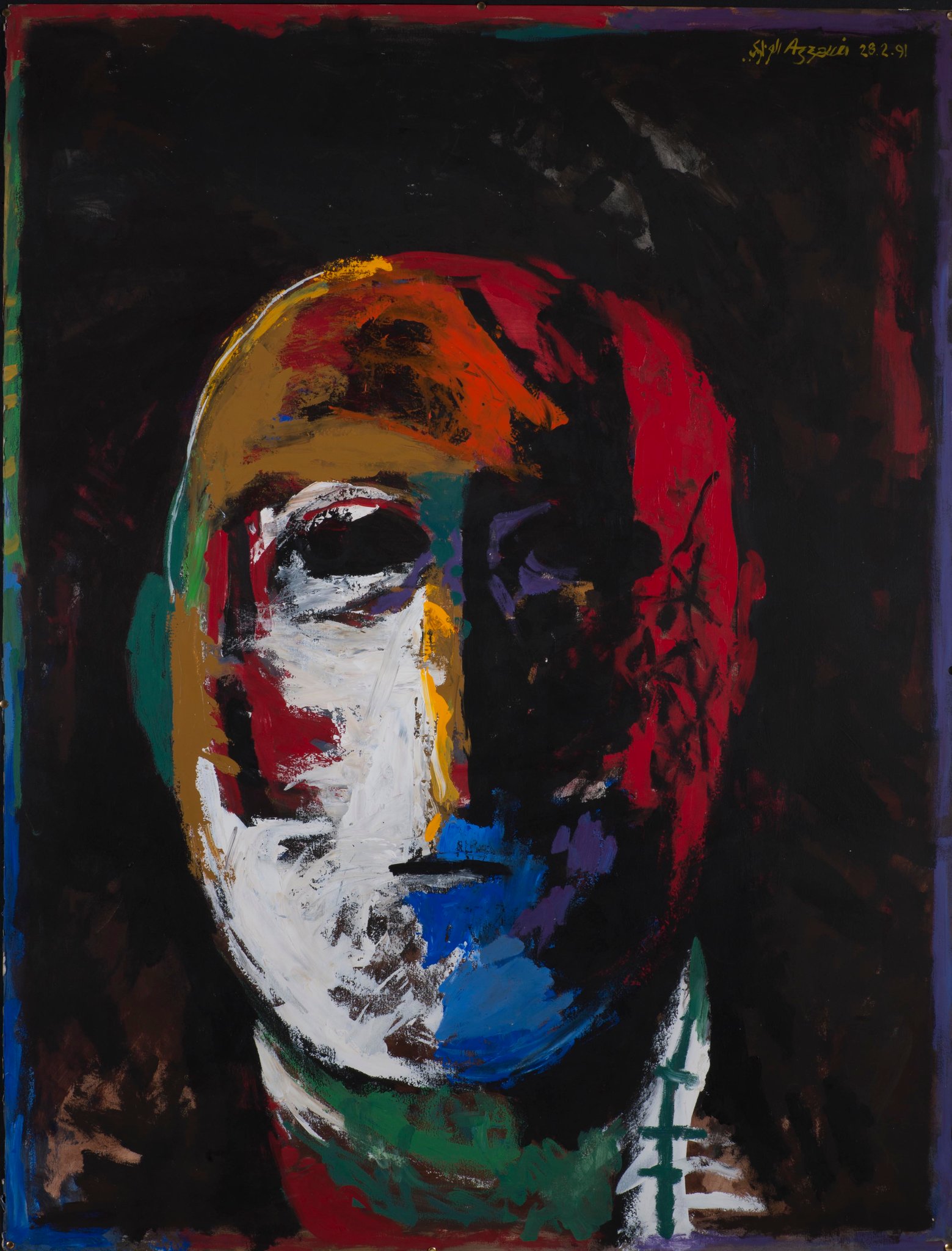 IMAGE: “Victim’s Portrait” (1991) was inspired by a gruesome photograph of a killed Iraqi soldier. Credit...Dia al-Azzawi

Postwar, Iraq entered a long, grueling period of international sanctions that beggared its once robust middle class. Art supplies like lead pencils, barred as possible “dual use” for weapons, disappeared. So did the art market.

“It is not about reading the poem, but rather visualizing it,” said Ms. Shabout. “He has always taken the traditional into new dimensions.”

In the late 1990s, Mr. Azzawi looked for Iraqi art reflecting the debilitating effect of the sanctions. “I could not find anything which expressed the difficulties of what was going on there,” he said. “I started to contact some artists to do books for me.”

“I have an incredible collection,” he said, and has refused to sell them. More than 30 are in the show.

Most address the toll of war and occupation, like the heavy concrete blast walls that sliced through Baghdad or the March 2007 bombing of Mutanabbi Street, the book market and beating heart of intellectual Baghdad.

The dafatir are novel, echoing Baghdad’s past as an important source of illuminated Islamic manuscripts. Pushed by Mr. Azzawi, they evolved into a uniquely Iraqi format — ragged, creative and high concept.

“They resist display and it is all about documentation,” said Zainab Bahrani, an Iraqi professor of Ancient Near Eastern Art and Archaeology at Columbia University. “They are really powerful and original because they are not derivative of what was happening elsewhere.”

When he tires of painting, Mr. Azzawi said, he finds sculpting more liberating.

In the immediate aftermath of the war, President George W. Bush made his infamous “Mission Accomplished” speech, even though years of bloodshed and the destructive wrath of the ISIS caliphate lay ahead.

In response, Mr. Azzawi took several years to complete “Mission of Destruction,” a billboard-sized work that fills an entire gallery wall at MoMA PS1. It is a strident antiwar manifesto in paint, also reflecting his sense that ordinary Iraqis paid the price for Saddam’s violent debacles. 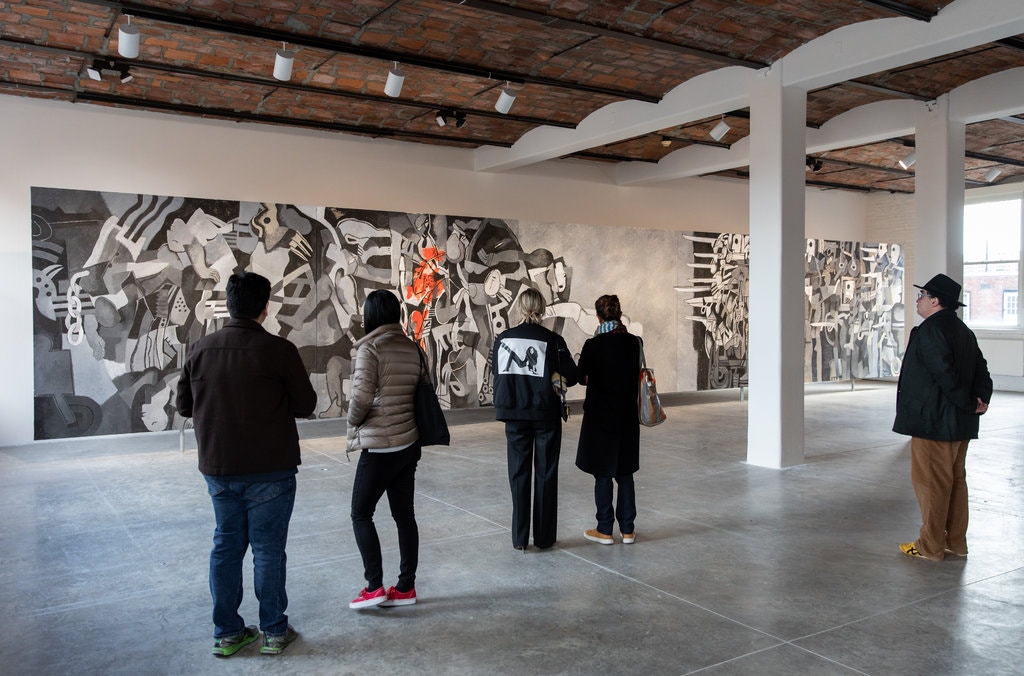 “Part of it was mourning,” he said. “It was obvious that the Iraqi army could not face the American army. The result was easy to predict.”

On one end, American soldiers in their inevitable sunglasses bristle with bayonets and destructive machinery. On the other end, representing Iraqis, lies a chaotic jumble of severed limbs and death masks.

The only color is a splash of red among the victims. In the middle, a shrouded corpse tumbles into an abyss.

Worse followed. Mosul, Iraq’s second city, fell to the Islamic State. Mr. Azzawi watched aghast the footage of warriors smashing priceless ancient statues that he himself had helped assemble for the city’s museum.

“How on earth can somebody come and do this?” he said. “I don’t think that this is Islam. If this is Islam, I would not be a Muslim, definitely.”

Mr. Azzawi now divides his time between a studio in Doha, Qatar and his main one in northwest London, an old school in a small industrial park.

Long ago, Mr. Azzawi was inspired by the Epic of Gilgamesh, a dark Mesopotamian tale that follows its hero on an arduous quest to discover the secret of eternal life.

In the future, Mr. Azzawi said, perhaps these last decades will be viewed as another such epic.

In the meantime he considers the Iraqi works in the MoMA PS1 exhibition as collective dissent.

“What happened to Iraq is an epic, it is the complete destruction of Iraq either by the Iraqis or by the foreign forces,” he said. “For me this is an opportunity to show Iraqi artists and to express a kind of protest against what happened to their country.”

It's nighttime in Kyiv. Here is the latest on Russia's war in Ukraine

Outside the Walls of a Salvadoran Prison, ‘We’re All Crying Mothers’

IPG Releases Statement on US Withdrawal from Afghanistan

Welcome to the Iraq Project